Today’s Mystic features scenic vistas of the river, a vibrant recreational boating scene, trendy restaurants and shops, and a palpable nautical vibe.  It’s awesome, and it’s one of the top tourist spots in New England. But how did Mystic come to be? Who built all this?

Early English colonists, especially the ambitious ones, soon discovered that the opportunities in this rugged new land were tied to the sea.  Mystic, and its close neighbors Noank, Stonington, Groton and New London became major shipbuilding centers in the new United States of America.   This region, was geographically blessed to be an ideal place to feed the countries growing appetite for maritime commerce.

“…..Strategically located between New York and Boston, the coast here is characterized by multiple deep water coves, inlets, rivers and estuaries that sliced into a mainland chockfull of virgin timber forests.  Ideal for ship building….”

The shipyards of Mystic alone built over 1400 ships between 1784 and 1919.  These included small fishing and transport sloops, but also included massive trans-oceanic merchant ships and the uniquely beautiful Clipper Ships, that many believe were the most beautiful ships ever created.

Mystic-built Clippers like the Andrew Jackson and the David Crockett were noted for their speed as well as their durability and beauty.  Though disputed by some historians, the Andrew Jackson is reported to have completed the fastest ever trip from New York to San Francisco, “around the horn”:  89 days 4 hours, 14,000+ miles.

The Mystic Seaport Museum here in town, sits along the river where once was a huge shipyard called George Greenman & Company.  Greenman built hundreds of vessels including 11 of the 21 classic Clipper Ships built in Mystic including the David Crockett (built 1853):  215 feet long, 40 feet wide and drew 27 feet. Sealing, whaling, fishing and merchant shipping were also important to Mystic, but the core of what you see and feel here today, comes from an impressive legacy of yankee shipbuilding.

Bill Pryor is the founder of Mystic Revealed, a blog and tour site.  He runs a variety of guided-tours specializing in the history, food and local culture around Mystic. mysticrevealed.com – bill@mysticrevealed.com 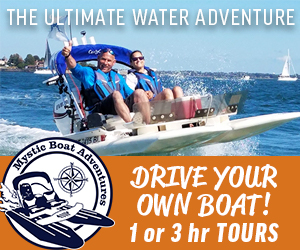 Psst! National Absinthe Day is just around the cor

🔎 Zoom in for clam shack sign and other nautica

❄️⚙️A snowy sight on the drawbridge in Dow

❤️Tapas and Sangria on the Valentine’s Day m

Doughnuts and coffee with a view from Mystic River

Chickadees, ages 2 to 3 with a Caregiver