Note: it is interesting that Wikipedia chooses to mention that Mystic Pizza is in the historic district — hey, 1989 was history too!

A few homes on “Captain’s Row”, a stretch of houses on Gravel Street once home to the area’s sea captains

In terms of the Historic District, according to the 1979 National Register nomination, Mystic’s historic status results from

” … the completeness of the 19th-century community here preserved. Seldom are houses, public buildings, stores, and factories of a 19th century town all in place, in good condition, and still in use, as they are in Mystic. The variety of architectural styles that the prosperous seafaring citizens employed in building up their community provide fine examples of the ongoing, 19th-century development of taste and design … ”

Sabino – the oldest wooden, coal-fired steamboat in regular operation in the U.S.

Charles W. Morgan – the last wooden whaleship in the world

The four National Historic Landmarks — all of which are floating, and in the Mystic Seaport Museum, are:

I agree with the nomination —- it is rare to see so many well-preserved historic buildings together in a single place. Something about it is not only charming, but re-assuring.

Bill Pryor is the founder of Mystic Revealed, a blog and tour site. He runs a variety of guided-tours specializing in the history, food and local culture around Mystic.
www.mysticrevealed.com / bill@mysticrevealed.com 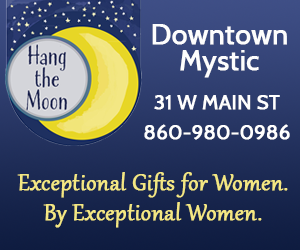 This morning in Mystic (ICYMI) 🌅 #thisismystic

May you find yourself in Mystic making new memorie